You may have noticed the new look of the member home page at esource.com! Well, six months ago, the design team at E Source—our team—embarked on the journey of this redesign. This page is most E Source members’ first impression of us, so we wanted it to represent us well. Our users didn’t really spend time on our old home page (Figure 1), and we knew there was so much more we could communicate with it.

The first thing we did when beginning the redesign was to look at member feedback over the years to see if there were any recurring issues or trends. A few of the things we found and wanted to address in this redesign were that our members:

Using that feedback, we came up with a couple of concepts, then we built out an interactive prototype (Figure 2) and tested it with five of our members—new territory for us, since we hadn’t tested with users this early in the process before. Although the prototype was only a rough representation of what the interface would look like, it got us quick feedback that allowed us to pivot early in the process to more closely align with what our users wanted.

When we tested with users, we first asked them a series of introductory questions, such as “How much time do you spend online every day?” and “Rate your online tech savviness on a scale of 1 to 5, where 5 is the highest and 1 is the lowest.” After that, we moved into scenarios to test the interface, such as “What’s your first impression of this page?” and “If you were looking to find information about a question that you asked one of our research experts, how would you do that in this interface?” We even asked some feature-specific questions like “How do you feel about gamification?”

We got some positive feedback:

And some things that weren’t as positive (but still gave us valuable information):

In this second round of feedback, our testers gave us more-positive reactions, saying that:

And they gave us a few more things to work on, such as:

Over the next few months, we worked with our software developers to build the new logged-in home page you see today (Figure 4). We did our best to address as many of the user suggestions as we could, and we’ve noted some of the bigger requests that we didn’t have time to address in this redesign so we can address them later.

We hope our E Source members will love this new approach—tell us what you think! 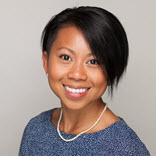 Melissa Utomo creates front-end code for the E Source website and tools while assisting with design and user testing. Prior to web development,...